Music cue: “Feel It All Around” by Washed Out

After a few glorious starlit nights parked off to the side of National Forest roads, we rolled into the dream of the nineties, the dream of liberal America, the dream of greenwashed gentrification and rampant rentism (see Peter Frase’s Four Futures for more clarity on this point): Portlandia! At first, the dream was real. We reunited with my long lost housemate, Emma, over Hot Lips pizza and fought through throngs of hipsters for a night of overpriced gentrified brews and fried potatoes.

My personal favorite part of liberal utopia came the following morning with an ever-available vegan breakfast. The Hungry Tiger pulled through with tofu scramble, potatoes, and vegan biscuits and gravy, and we were able to crash in the coffee shop next door (clearly denoted as a safe space) for a few hours of internet access while overhearing an anime discussion group full of white hipsters raving about Death Note. Amidst all these contradictions, we ran outta that place and spent a good deal of time in the Powell City of Books reading about Christian marriage advice, Asian American Labor organizing, and other topics of interest.

However, right when we thought liberal utopia was the place to be, we awoke to a neoliberal reality. Despite all the “(insert list of marginalized social groups) Are Welcome Here” signs plastered across nearly every local business in the city, we quickly discovered that we did not have a place to park and stay overnight, as street space was highly regulated, Catholic Workers either disbanded or fell through, and ordinances were in place in Portland and all of its surrounding suburbs outlawing overnight parking in Walmart (and other business’) parking lots. In a shocking turn of events, it turns out travelers and homeless folks are not welcome here. We eventually settled in a side parking lot of a Walmart in Beaverton after aimlessly driving through suburbia, where we were out of sight of main streets. While we once planned on working temp jobs in the area, we quickly affirmed that we would not be staying in Portland for very long.

The following day resulted in further uncomfortable encounters. Starting with another episode of aimlessly driving around trying to find a place to hang out without paying exorbitant prices, we drove through Forest Park and a distasteful family park on the northeast side before finally settling down in Pier Park in St. John’s, which allowed us to fill up our water tank in the men’s locker room. We quickly hung up our hammock and were eager to start reading some Michael Harrington, when a group of disc golfers informed us that we might get hit. We didn’t get hit, so we continued reading until we were interrupted by three more groups of golfers, including a white dreadlocked stoner who insisted three times that “I’m not telling you to move, but you’re going to get hit.” This was no utopia. Our ears were bleeding from the passive liberal pleading. It was time to move on—but to where? We decided to buy some snacks at the food carts (they had Hawaiian Sun guava juice of all flavors!) and walk through a horribly gentrified Chinatown, which ended in a two block long waiting line for Voodoo Donuts. I have no words for how awful the sight was. And so we decided to check out the location of the infamous Women and Women First bookstore (which is woke as hell despite its gentrified presence btw) before buying overpriced hipster coffee at an industrial coffee shop/bamboo table workshop while killing time before the Portland Jacobin reading group.

It is safe to say that we were at a pretty low point at the moment, but as always, the Socialists pulled through and reassured us that there are still cool people left in the world. After fruitful discussions of European politics, religion, and work, we walked over to the bar for a round of drinks in true Jacobin Reading Group fashion, where we ranted about Boise and annoying anarchists. Glad to have had one final positive experience in Portland, we retired to the camper and spent the night across the street from the bar, ready to bolt out of town before the libs started getting too patriotic, but not before getting a rad vegan breakfast burrito and wishing Emma the best of luck on her summer research.

After finally escaping the unwelcoming HipsterGentrifitopia, we went back into the forest and made our way to the West coast, happy to be away from the uncanny weirdness that Portland desires to keep intact. We had a rough stay at Gnat Creek, where we saw some sad fish, then we ventured back through Uniontown, Astoria for a quick dive into the Worker’s Bar before heading north. Our coastal travels eventually brought us up and through Washington state, where we visited an OG Lazaretto (“pest house” where diseased immigrants were once kept), and into the Olympic Peninsula, namely Olympic National Forest/Park and Port Angeles, a safe space for camper/RV travelers. We spent a few days exploring the area, which included some majestic hikes, a sighting of slugs, fast burritos, defacement of military advertisement cards, YMCA showers, and the best Walmart ever. Alas, we were sad to depart, but we were able to catch a ferry out of Port Townsend with overpriced food and drinks and make our way across the border (after learning that people try to smuggle taxidermy snakes, alligator meat, gator chowder, and other disgusting products across the border) once again into another liberal safe haven: Vancouver, BC.

Alas, we find the hospitality here to fall short as well. After another distressing night of being rejected not by Walmart, but by some company that owns Walmart’s parking lot, we attempted to camp in a provincial park, only to discover that there are no roads into the park. As dusk was approaching, we opted to camp on the side of the road, again distressed at the illusion of liberal “openness” to humanity or whatever. While we still have no idea where we will be staying tonight, we have found another radical space of great things in the Spartacus Bookstore, where I purchased the IWW Songbook and the graphic adaptation of A People’s History. So while the road ahead is unknown, at least we can sing union songs in our despair. We shall hold the fort until better days arise. 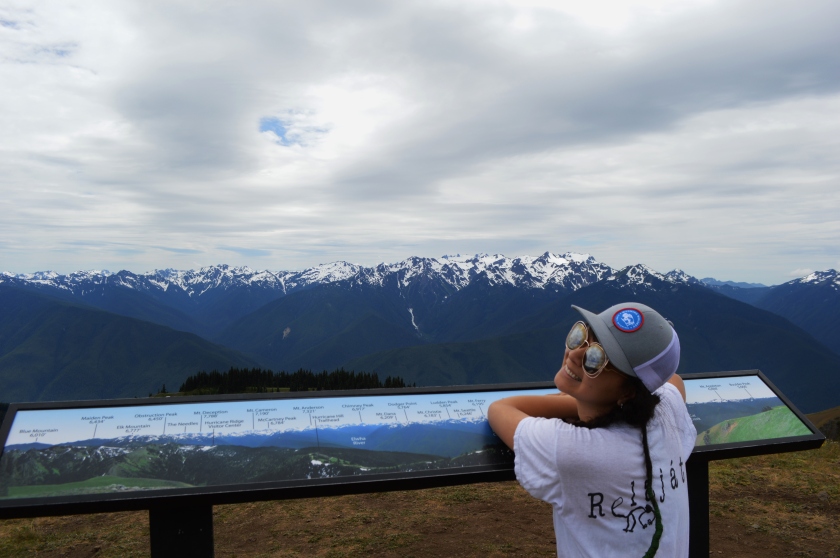 Jade is ecstatic that the hike to Hurricane Hill is over (Olympic National Park).

Nap on the bench.

This is a text widget. The Text Widget allows you to add text or HTML to your sidebar. You can use a text widget to display text, links, images, HTML, or a combination of these. Edit them in the Widget section of the Customizer.
Loading Comments...
%d bloggers like this: